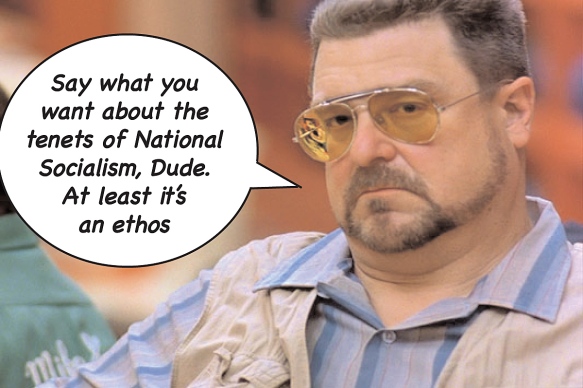 SAY WHAT YOU WILL about the phrase “say what you will,” it can be an effective preface to a questionable comment.

Stalin and his mustache

Example: “Say what you will about Stalin, the guy grew a helluva mustache.”

See how well that works? The speaker has compartmentalized his praise. So what if Stalin was a really bad dude. This is about mustaches, not morality!

The idea behind the “say what you will” phrase is it suggests — but doesn’t specify — something bad about the subject before going on to something different and better. Which is why I got confused last week when I heard a caller on a talk-radio station begin a sentence with “Say what you want about Anne Frank …”

I didn’t even hear the rest. My brain was too tangled with questions. Like, What’s wrong with Anne Frank? How did she earn a “say what you want”? Is there a dark side to her story that I don’t know about? 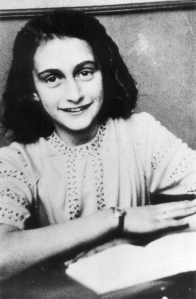 What did Anne Frank do wrong? Nothing bad, don’t worry.

On reflection, I think the caller just bungled her “say what you want” preface. She must have meant that people say a lot about Anne but they don’t say enough about her writing, or optimism, or whatever it was I tuned out.

Or maybe the caller tried to reverse the “say what you want” convention, starting with the acknowledgement that Anne was a good kid and ending with a critical “but” as in “… but she knew nothing about taxidermy!”

Nice try, caller, but it doesn’t work that way. Starting a sentence with “say what you want about the miracle of childbirth …” and finishing with “… it sure is messy” doesn’t cut it. Our brains are programmed to hear “say what you will/want” and think, Ooh, there’s something bad about this person.

Orin Hargraves agrees with me. The author of It’s Been Said Before: A Guide to the Use and Abuse of Cliches (2014) writes that “say what you will” “is mainly used to concede that there are grounds for criticism of someone or something before going on to praise them.”

Here are some examples from the Internet:

“Say what you will about the greedy capitalist record chiefs of the 1970s, they sure knew how to throw a party.”

“Say what you will about British cheese, there’s not a cheese that’s been more copied, emulated, and changed than good old English cheddar.”

My all-time favorite use of this phrase, or cliché, comes courtesy of John Goodman’s Walter Sobchak in The Big Lebowski (1998). Distressed to learn that a bunch of thugs are actually German nihilists (who reject all religious and moral principles), he expresses a slight preference for Nazism. “Say what you want about the tenets of National Socialism, Dude,” he tells the Jeff Bridges character. “At least it’s an ethos.”

As a fictional character in a quirky comedy, Sobchak could get away with a comment that might incinerate a real person. Ask Bill Maher. Shortly after the 9/11 attacks, the host of Politically Incorrect got pilloried for defending the courage of the terrorists. Said Maher, “Staying in the airplane when it hits the building, say what you want about it, it’s not cowardly.”

Apparently, “say what you will/want” can’t make every statement palatable. Too bad. We still have to think before we speak.

Say what you will, that’s probably a good thing.

AS A YOUNG OREGON SPORTSWRITER in the 1980s, I never saw a high school quarterback who could throw and act like Terrell (Texas) High’s Jamie Foxx or catch and sing like Gibbs (Tennessee) High’s Kenny Chesney.

Ed Asner played on the offensive line at Wyandotte High in Kansas.RAZ

Then again, I never saw any high school plays or heard any teenage garage bands back then. There could have been a singing southern Oregon linebacker or thespian tackle who escaped my notice — and everyone else’s. If any 1980s-era southern Oregon football players made it as entertainment or political superstars, they’ve kept it awfully quiet.

There’s nothing quiet about the following, who have made more noise on the stage, screen, or stump than they did on the high school football field. In fact, the only restriction for this list is the person cannot be a former NFL star, like Michael Strahan, or college football superstar, like Cornell’s Ed Marinaro, who finished second to Pat Sullivan in the 1971 Heisman Trophy voting.

Let me know if I’ve missed on any first-rate celebrities with prep football backgrounds —I’m sure I have.

MY ONLY BEEF with Foxx’s Oscar-winning performance as Ray Charles (Ray, 2004) was all that beef on his arms, which looked buff from lifting weights, not bruised with heroin needles. Foxx passed for more than 1,000 yards in high school and later portrayed a football player in Any Given Sunday (1999). 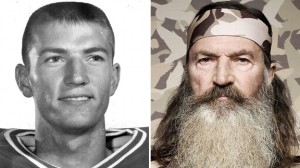 Phil robertson as a clean-cut QB and as a hirsute celebrity.

Reynolds and Caan looked like athletes and played major college football, the former at Florida State and the latter at Michigan State. Although he’d been acting for a decade, Caan got his big break by playing real-life running back Brian Piccolo in the 1971 TV movie “Brian’s Song.” Reynolds portrayed football players in The Longest Yard (1974) and Semi-Tough (1977). 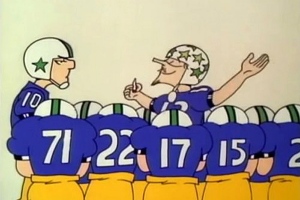 It’s hard to imagine Willie Nelson (“On the Road Again,” 1980) as a high school jock, although it’s easier if you picture him as someone like Zonker Harris from Doonesbury, firing up a blunt in the huddle.

Strait (“All My Exes live in Texas,” 1987) and Swayze (Dirty Dancing, 1987) are two more Texans, which begs the question: Is high school football a prerequisite to show-biz stardom in the Lone Star State? Sure seems like it.

Nolte, the tight end in this group, portrayed a creaky wide receiver in North Dallas Forty (1979, right). Chesney is one of many high-school-athletes-turned-country-music-stars, a category that includes Tammy Wynette, an all-state basketball player in Mississippi. “Lost” (2004-10) star Matthew Fox went on to play at Columbia University, where the Lions lost 38 out of 40 games — talk about lost. Kutcher (“That 70s Show,” 1998-06) played linebacker as well as wide receiver in high school and has been an assistant coach at Harvard-Westlake High in North Hollywood.

Wayne (Stagecoach, 1939) who played at USC, and Jones (No Country for Old Men, 2087) who played at Harvard, are the Oscar-winning guards. Jones started for the 1968 college squad that scored 16 points in the final 42 seconds to tie Yale; he is featured prominently in the 2008 documentary, Harvard Beats Yale 29-29.

Ford, the 38th president (right) and Beatty hiked the ball, although the future star of Heaven Can Wait (1979) looked nothing like a hard-nosed center — he was too lean and far too handsome to be a member of the “big uglies,” which is what sportscaster Keith Jackson called offensive linemen. Ed Asner (“The Mary Tyler Moore Show,” 1970-77), Joe Don Baker (Walking Tall, 1973), and Brian Dennehy (First Blood, 1982) are bigger and less comely than Beatty, although some would describe them as ruggedly handsome rather than homely.

The Axton family had a good year in 1956: Mae Boren Axton’s “Heartbreak Hotel” made Elvis Presley a superstar, and her son Hoyt earned a scholarship offer to Oklahoma State. The Axton boy would later write “Joy to the World (Jeremiah was a bullfrog)” for Three Dog Night. 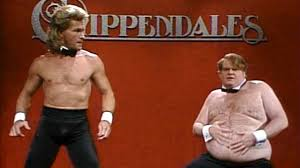 Patrick Swayze and Chris Farley both played high school football. Take a guess: which one played running back, and which played nose tackle?

A 5-foot-8, 215-pound nose tackle, Farley (Tommy Boy, 1995) was agile, energetic, and apparently quite good. It’s easy to imagine the Rock (The Tooth Fairy, 2010) and wide-bodied John Goodman (“Roseanne,” 1988-97) stuffing the line, but high school linemen didn’t get much better than Ed O’Neill, who portrayed Al Bundy on “Married with Children.” O’Neill went on to play at Youngstown State and signed as an undrafted free agent with the Steelers. They cut him in favor of a couple of other rookie defensive linemen, Joe Greene and L.C. Greenwood.

Malick’s face and physique are unfamiliar to most of us because he’s a behind-the-camera guy with Oscar nominations for directing The Thin Red Line (1998) and The Tree of Life (2011). Toby Keith had a huge-selling 2003 duet with former running back Willie Nelson (“Beer for My Horses”) as well as 19 solo number-one country singles.

Michaels, who became lead singer for the rock band Poison (“Every Rose Has its Thorn,” 1988) two years after high school, also played quarterback and defensive end. Kristofferson portrayed a pro wide receiver and the best buddy of running back Burt Reynolds in Semi-Tough (1977), and Klein played an injured quarterback reluctantly running for class president in 1999’s Election.

Belushi (Animal House, 1978) may have honed his physical comedy skills on the football field; it’s a shame he never made a “Samurai linebacker” sketch during his days on “Saturday Night Live.” While Hamm (“Mad Men,” 2007-15) played football, his real sports passion was baseball. He played catcher in high school and was best friends with John Simmons, son of long-time Cardinals catcher Ted Simmons.

These actors are often listed as former high school defensive backs, but it’s hard to find specific details about their positions (were they cornerbacks or safeties?). They may have been two-way players who garnered more attention for their offensive skills.

Raise your hand if you’re surprised to find Ryan Seacrest (“American Idol,” 2002-14) on this list.

Majors (“The Six Million Dollar Man,” 1974-78), originally named Harvey Lee Yeary, took his last name from a former Heisman hopeful from the University of Tennessee — Johnny Majors. Runner-up to Paul Hornung in the 1957 Heisman, the earlier Majors may be more familiar to college football fans as head coach of the national champion Pittsburgh Panthers team of 1976, as well as a long-time coach at his alma mater, Tennessee.

Cosby (“The Cosby Show,” 1984-92) dropped out of high school after the 10th grade to join the Navy. At Temple University, he excelled at a number of track events (high jump, shot put, low hurdles, javelin and discus) and played fullback on the football team.

Dean Cain (“Lois & Clark: The New Adventures of Superman,” 1993-97) was a superb all-around athlete who played football at Princeton and signed as a free agent with the Buffalo Bills. A knee injury ended any hopes of a pro career. 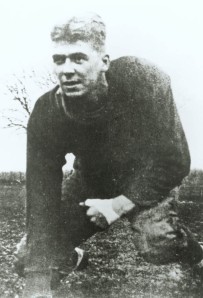 Years before playing the Gipper in “Knute Rockne: All American,” Ronald Reagan played football for real at Dixon High in Illinois.

Ferrell’s (Anchorman: The Legend of Ron Burgundy, 2004) field-goal kicking was no joke: He made 14 field goals and 41 extra points his senior year (although he also missed nine PATs). Reagan, the 40th president, could do just fine as the punter, but the multi-skilled Ike is around just in case.